You are here: Home / Mortgage / Should I get a home loan or continue paying rent – the debate 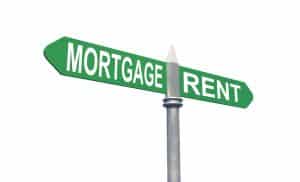 The RBA recently released a paper announcing the percentage of property growth needed on an ongoing basis for a home loan to purchase property to be more advantageous than renting.

The paper states that house prices around Australia have increased by 2.4 per cent, taking into account inflation and ownership costs, over the past 60 years.

It claims, that if prices rise 2.9% per year moving forward, taking out a home loan and buying will beat renting over a period of eight or more years of ownership. However, if home values only increase by the expected real rate of 1.7 percent, it will take more than 30 years.

The paper has sparked a lot of debate as to which option leaves you with a higher disposable income. Opinions are divided and largely dependent on location and lifestyle.

RP data analyst Cameron Kusher confirmed location as a key variable in determining which option provided the best return, saying there are certain suburbs that would have likely outpaced inflation, making homes in these areas worthwhile investments.

“Realistically, most suburbs in Melbourne and Sydney have grown in excess of the (2.9 per cent) projection,” he said.

“Over the last 15 to 20 years we have definitely seen growth in excess of inflation most of the time.”

Others argue that while interest rates may be at an all time low, it’s difficult to save for a deposit when you are living, shopping and eating in the city in order to be close to work.

Former real estate agent Martin Beard used to own four investment properties, but sold them all and started renting.

“I look at the massive amount of money that gets tied up in your home… I live debt-free, basically,” he said.

“We live in a big home in a great suburb that is so close to everything with big living areas and a lock-up garage, so I am happy with the compromise.”

The RBA acknowledged there were limitations in the paper, such as non-financial benefits to owing your own home, including security of tenure, freedom to renovate and pride of ownership.

It’s a debate that’s ongoing and everyone will have a different argument, as it all comes down to individual priorities, how soon you wish to buy, where you want to live and how you want to live.

So if you feel that now is the time to enter the property market and take out that home loan, then your first course of action should be to contact a mortgage broker, who will be able to guide you through the process of applying for a mortgage.