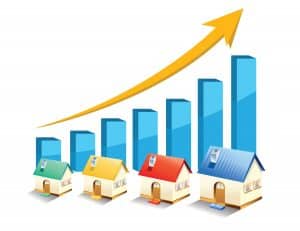 Australians’ appetite for mortgages shows no sign of abating, with the Veda Quarterly Consumer Credit Demand Index revealing a 10.8 per cent on-year increase in applications for home loans in the March quarter.

NSW led the way in terms of demand for new mortgages in the March quarter, with a massive 19 per cent growth year on year. Tasmania followed (with 13.9 per cent), while Queensland (10.5 per cent) and Victoria (10.4 per cent) also showed double-digit growth.

Not surprisingly, property values have continued to increase in recent months across the country, with dwelling values rising by 3.5 per cent since the beginning of 2014, according to the RP Data-Rismark Home Value Index for the March quarter.

Sydney property values are now almost 16 per cent higher than their previous peak. All capitals except Perth recorded a rise in values during the past three months, with Melbourne up 5.4 per cent, Hobart up 4.7 per cent and Sydney up 4.4 per cent.

RP Data research director Tim Lawless said half of Australia’s capital cities now showed record dwelling values. Sydney is 15.8 per cent higher than the previous peak, Melbourne is up 4.7 per cent, Perth is up 2.9 per cent and Canberra is up 1.2 per cent.

“Over the long term, I don’t believe such a strong pace of growth can be sustained. We expect housing market conditions to cool down as the year progresses,” Mr Lawless said.

The boom in dwelling values hasn’t as yet undermined housing affordability, according to the most recent Housing Affordability Index. Produced by the Housing Industry Association (HIA) and Commonwealth Bank, it recorded a fall of 0.5 per cent from the September 2013 quarter to the December 2013 quarter.

“Those in the housing market — or who have been on its cusp and then entered in recent years — have experienced a considerable improvement in affordability,” he said.

Rates remained on hold again in April, marking the seventh consecutive meeting where the board has kept rates steady at 2.5 per cent, keeping mortgage rates at all time lows. LJ Hooker deputy chairman L Janusz Hooker said the Reserve Banks of Australia’s decision to leave rates on hold is good news for the property market.

“From all indications, we are anticipating a very busy Easter and a strong market heading into winter,” he said.